While most people visit to The Dead Sea to experience the surrealistic sensation of floating on water, few understand the chemical make-up of The Dead Sea.
The water of the Dead Sea contains 21 minerals including magnesium, calcium, bromine and potassium. 12 of these are found in no other sea or ocean and some are recognized for imparting a relaxed feeling, nourishing the skin, activating the circulatory system and for easing rheumatic discomfort and metabolic disorders.

The Dead Sea is a source of over twenty-one different minerals, each one with unique benefits for health and beauty. Among the best known are:

This mud is known for its mineral-rich, therapeutic properties. Due to its exceptional elasticity, plasticity and absorption, it is ideal for wraps and spreads.
Heat retention permits a very slow, progressive, and continuous transfer of heat to the body, making it perfect for pampering pack treatments that are meant to cleanse and supplement the skin, and for thermo-peloid therapy.
The Dead Sea mud is free of germs and E-coli-like organisms. It relieves pain, improves circulation, causing the entire body to relax. The mud works wonders on those suffering from acne, psoriasis, rheumatoid arthritis, and other ailments.

The Dead Sea Salts are natural crystals containing various minerals of a relaxing and healing nature.
The Salts texture, heat conductivity, and other virtues (usually along with immersion in water) improve blood circulation, exfoliate the skin of dead cells (when roughly applied with small amounts of water), and increase the skin's metabolism.
Due to these actions, the whole body feels relaxed.

It has been proved that these Salts relieve aching muscles and joints notably, caused by arthritis and rheumatism, and aid in the healing of psoriasis and eczema. Due to the effects that Salt Treatments, such as immersion in salt baths, may have on the circulatory system and general metabolism, persons suffering from high blood pressure, should not be treated in such a manner without first consulting their physician. 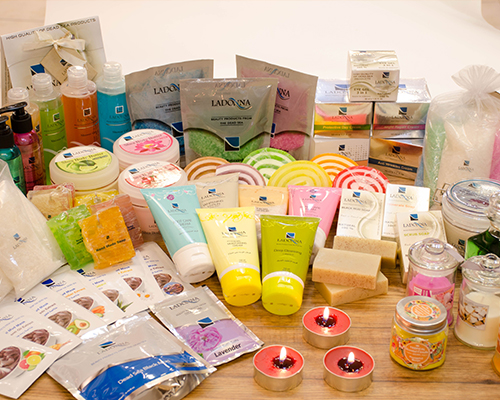